This new, iterative process of waveform collection / validation / potential waveform correction results in tires tested more accurately and with greater repeatability, within a much faster measurement cycle.
In 2009 CTI decided to develop a smarter way to begin measurement acquisition for a uniformity test, rather than just waiting a fixed amount of time for tire stabilization. Less than three years later we surpassed that goal and produced Waveform Validation and Correction (WVC) – an entirely new and proprietary way of collecting, evaluating and processing tire uniformity measurement information.

Validation A set of algorithms and procedures examines, in real-time, the interrelated component waveforms produced by the interacting subsystems of a modern uniformity machine. When analyzed together, the individual waveforms constitute a measurement value, representative of a system or collection of waveforms, that can be validated as being worthy of further application, or invalidated and considered not worthy of processing. Invalidation always requires additional measurements to be taken.

Correction This process identifies the portions of an individual waveform (such as the radial channel) that are being disturbed by another interacting machine subsystem (such as the air regulation system, loadwheel, spindle, rim, etc.), or by one of the lateral channels, or even the other radial channel. In some instances, and for some magnitudes of disturbance, the effect of the disturbance can be removed from the affected waveform. In those cases, the measurement process can proceed with the already collected and now corrected waveform set.

The radial force par values for a set of master tires generally becomes lower by about 1 to 2 percent due to the fact that WVC mitigates the tendency of a machine to increase a radial force waveform affected by undesirable interactions of its subsystems.

We have found that the quality of the radial force measurements for peak to peak and all harmonics benefit the most from the WVC process. For a machine running at its fastest cycle time, the 1 sigma repeatability for radial force measurement can generally be under 0.25 daN (0.55 LBS) and for a machine with well performing subsystems, below 0.20 daN (0.43 LBS). With lowered par values and improved measurement capability due to reduced 1 sigma repeatability, the number of tires measured and passed to 1st class increases.

The cycle time of the machine is also greatly reduced. In fact, WVC allows 2 direction test cycle times for our flagship CX111 machine of well under 18 seconds. Since WVC can ensure valid measurements and also remove unwanted disturbances from a still settling and stabilizing waveform, the machine can begin testing as soon as tire position (loadwheel walk) has been accomplished. That generally occurs somewhere around 1.5 to 2.5 revolutions, depending on the tire size and construction.

While WVC provides the greatest benefits when used with other Poling Group innovations like the TTOC6 controller, the TDAQ measurement collection system, and the Tire Automatic Inflation Regulation (TAIR) pressure regulation system, we have GREAT NEWS for our customers who already own a TTOC controller! Several elements of the WVC software set can be installed on your system using hardware you already have, for a modest charge per machine, and within a single multi-day service call, all your machines can be upgraded. 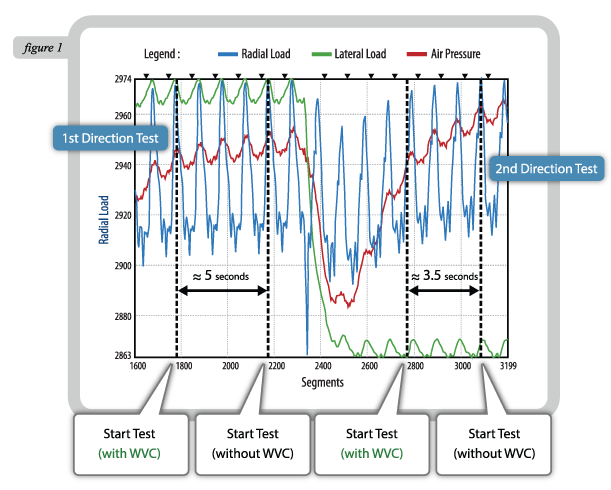 WVC’s proprietary process for waveform sanity checking and validation uses a compliance windowing limit for individual waveforms. Waveform values that fall outside the desired acceptance window are invalid, requiring the process to receive additional measurements until an entire revolution of validated waveforms is obtained. At that point, the complete set of waveforms has been scanned and corrected for any unwanted disturbance in the radial or lateral waveforms caused by another subsystem.

The waveform shown in figure 1 is a great example of what a poorly performing air regulation system does to a radial waveform.

The plot shows both the first and second directions of tire rotation for the test, across a time scale where 1 revolution = 100 Segments.

1st Direction Test On the left side of the plot, note how the air pressure (red line) increases over several seconds, with the radial waveform (blue line) generally moving in the same direction.

WVC would allow the waveform to be used (Validated) at about segment 1770, since the effect of the increasing pressure on the radial waveform would be identified and mitigated with the Correction process. Without WVC, the test would have begun at segment 2150- almost 5 seconds later!

2nd Direction Test The right side of the plot shows the reverse direction test. In this case the air affects the radial waveform to an even greater degree.

Incidentally, the increasing radial force values will cause measurement error. WVC would determine when the consistency is sufficient to validate this waveform, allowing the test to begin at about segment 2750. Since the waveform can be corrected for the air pressure disturbance at that point, another 3.5 seconds are saved on the time required to complete the test.
Operating Parameters

Early in 2011 the Poling Group issued a white paper that discussed the boundaries of tire uniformity measurement capability and measurement capacity [Read Poling Group White Paper "Finding the Right Balance: Capability, Capacity, and Durability"]. It describes how a control system could be programmed to allow a trade-off between low repeatability sigma and high production capacity.

To actualize this trade-off on the factory floor, we designed WVC to use a configurable compliance window. A production site can modify the compliance window at a testing machine to affect all tires tested, or at CTI’s Final Finish Host to individually configure a window for each test code (recipe).

The TTOC6 controller screen includes an adjustable slide bar to set the compliance window in effect at a machine. Move the slider to the right to allow less stringent validation compliance and achieve a faster cycle time and greater production capacity, while slightly reducing the 1 sigma repeatability measurement capability. Alternatively, move the slider bar to the left to obtain a better 1 sigma repeatability measurement, while slightly reducing production capacity.

The following test results come from two different correlation/repeatability tests performed for a sample set of five Wrangler 225/75 R15 tires. Each result set summarizes a 5-test run of the tire set (5X5) with the machine operating at one of two different cycle times. The values are in daN.

Test set 1 shows a 1 sigma repeatability that is in line with the most stringent requirements we are currently asked to supply. That these requirements were met within a cycle time of 17.75 seconds is industry-leading, especially for a machine that can cycle several million times before major wear parts need attention.

Test set 2 represents the lower boundary of measurement capability. The 1 sigma repeatability is well below current industry requirements but still accomplished at a cycle rate of 19.25 seconds.