☰
the Poling Group
In 2001, CTI was acquired by David Poling, Sr, president of ASM (Akron Special Machinery). In 2003 the AKA 'the Poling Group' was created to unify the 5 companies owned by Mr. Poling. Please read below for more information on the history of ASM and the Poling Group.
In 1978 David Poling Sr., founder and president of the Poling Group, started his first engineering company, Akron Special Machinery. With determination and innovation, Poling continually guided his company toward the goal of becoming a world class supplier of equipment for the tire industry. After enhancing his company’s capabilities by entering the manufacturing field in 1983, Armstrong Tire Company hired ASM to rebuild tire uniformity machines. This opportunity allowed Mr. Poling to sharpen ASM’s design expertise and conceive of improvements that could be made to this small, but essential field of machinery production. 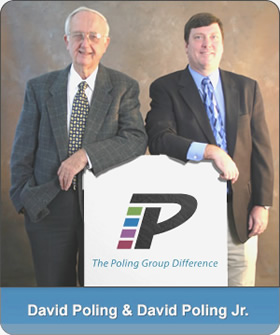 During the Armstrong Tire Company contract Mr. Poling teamed up with MSI (Measurement Systems, Inc.) to provide MSI TUO Controllers on the tire uniformity machines. Later that year, Mr. Poling acquired ASF (Akron Steel Fabricators) to focus on mill room equipment, such as calendering, batch offs, and pressure vessels, which expanded the equipment and services offered to his customers while lowering production costs.

In 2001 the new group of companies collaborated to produce and install the X100, the first tire uniformity machine to make use of newly developed X-frame technology. This groundbreaking design distributes the forces on the machine evenly throughout its frame to maintain more accurate, and therefore faster, testing results. Building on the success of the X100, ASM expanded the X Series to include TUO machines in a variety of sizes and with customizable testing capabilities, all taking advantage of the X-frame technology.

In 2003 Mr. Poling acquired Firwood Manufacturing and formed a new entity named Firwood~ASM. Satisfied that his acquisition of six complementary companies could contribute to nearly all major phases of tire manufacturing and testing, Mr. Poling decided to unify the companies under one name: the Poling Group.

Since its inception, the Poling Group has continued to focus on improvement and innovation. The Poling Group of companies currently holds 33 patents, with 2 pending, for various rubber-related equipment inventions. Shop floor information, product traceability, and final finish software specifically designed for tire manufacturing showcase the Poling Group’s determination to use superior technology to help its customers increase machine throughput and optimize product quality. Ultimately, the integration of equipment and software has enabled Mr. Poling to achieve his original goal of becoming a world class supplier to the tire industry.

Looking forward, David Poling, Sr. and Vice President David Poling, Jr. are excited about the opportunity to assist the tire industry in its effort to produce tires with improved fuel mileage, and noiseless tires. The ASM-Hasbach rolling resistance and endurance testing machines are already engineered to meet this need. In addition, the Poling Group has just introduced its newly patented Profile Generating Machine. This machine uses precision grinder units to consistently produce round tires with enhanced uniformity and balance characteristics that deliver a quieter and smoother ride.