It is now possible for advanced algorithms to determine the mechanical deficiencies of a modern Tire Uniformity machine and then adjust the measurement process to compensate for those deficiencies.
This patented concept for characterization of mechanical deficiencies and then compensation to mitigate the effect they have on the measurement is a huge step forward in advanced tire uniformity measurement methods. In addition to enhanced measurement results for high spring rate tires and even properly operating machines, the MECC process can provide a long lasting stop gap measure to achieve qualifying measurement results for a mechanically deficient machine PRIOR to repair or overhaul.

A common Quality Assurance (QA) practice in many tire factories is to run a "check" tire on each machine at least once a day. This process takes only a few minutes of production time and is used to determine proper correlation (magnitudes) for all measurements as well as providing an indicator of measurement repeatability. When the values of the "check" tire determine that the machine correlation or measurement repeatability have fallen outside a corporate QA specified tolerance, the machine must be repaired in some way to cause better measurement.

With MECC, it is now possible to run the characterization routine and, in many cases, the result is a set of compensation values that can be used to enhance the measurement values allowing the machine to correlate and repeat properly. The MECC process is a very nice alternative that allows the machine to stay in production while the machine is SCHEDULED for a time when mechanical repairs can be accomplished. 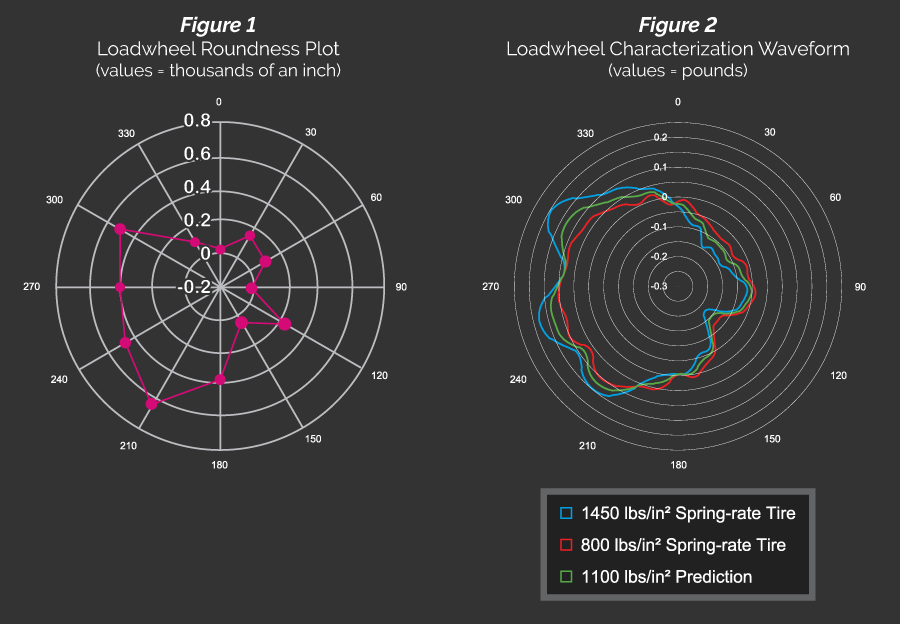 What 'Machine Effect' is, and how that information can be used

If the out-of-roundness looked like the loadwheel shown in figure 1 it would have an out-of-roundness of 0.0006 inches. While that is close to being an acceptable runout reading, it would still cause a problem with the radial measurement in a uniformity test.

So the question becomes, how big of a problem would that be? The answer is that it would be in proportion to the out-of-roundness of the part of the loadwheel that was involved in the uniformity measurement. The spring rate on an average 16 inch rim diameter tire is about 1000 LBS per inch of compression. So if the loadwheel with an out-of-roundness of 0.0006 inches was used to measure that tire, it could cause a measurement variance of up to 0.6 LBS. That amount of variance would not be considered good measurement repeatability.

How can the loadwheel out of roundness be characterized (calculated) and then how can that information be used to create a compensation process?

And finally, note how the standard measurement for loadwheel out-of-roundness done by all tire uniformity machine maintenance people is shown in figure 1. Can you see how it bears a striking resemblance in SHAPE to the force characterization shown in figure 2? That would be expected as loadwheel out-of-roundness is a large contributor to a machine’s measurement variance.

Until now, little could be done for a loadwheel that had reached an unacceptable level of out-of-roundness except to have it removed and refurbished.

We’ve just explained how MECC compensates for deficiencies with the loadwheel, but the great news is that we have a MECC process for rims and spindle adapters also!